Is There a Tick Time-Bomb in Your Backyard Zoo? Be Prepared with a Test Kit!

by Marge McClintock
Yikes! I found a tick firmly attached to my leg one evening before going to bed. Fortunately, I had the tick tested using a tick testing kit I purchased fromPasquesi’s. The brand I tried was Cutters. Happily, the results came back negative, but I also learned that the tick was adult, male, and un-engorged of the American Dog variety. (I also learned its Latin name. That’s a lot more than I knew about my husband on our first date!)

Besides deer, coyotes, skunks, raccoons, chipmunks, squirrels, foxes, rabbits, various birds, and lots of insects — a veritable zoo — our gardens can host  unwelcome ticks, with their many pathogens, such as Lyme’s Disease. One deer can carry up to a million ticks in various stages of life! Yet despite using insect repellants, you may find a tick firmly attached to your skin. Instead of worrying or unnecessarily rushing to get a blood test, there are $25 test kits available in local nurseries to test the tick.
Remove the tick, slip it into the kit’s plastic bag, and mail it off to the lab. You’ll be notified within a week as to what kindof tick it was (e.g., a deer tick or dog tick), and if it carried the Borrelia burgdorferi bacteria that cause Lyme’s Disease. Since ticks carry many other pathogens, the lab can also test for them, up to two y

ears for an additional fee.

With all of the visiting animals, sometimes our yards seem less like our idyllic garden get-aways and more like a wild kingdom zoo — but at least we don’t have to worry that we have been infested with a ticking time bomb like Lyme’s.

An Old Pest is New to Illinois…the Kissing Bug!

This tropical pest has migrated to our area. While the Kissing Bug name sounds sweet, it carries a parasite that can transmit a disease called CHAGAS, which can cause serious illness and long-lasting complications. Before you get too alarmed, know that experts claim the chances of becoming infected are small, but we all need to be aware.

Kissing bugs are attracted to the carbon dioxide we exhale and have been known to bite on the face, hence the cutesy name. Pets can be infected as well.

So, what to do? Seal cracks and remove dead leaves, wood piles and other shrubs close to your house. Turn off lights when not in use. Be alert to the appearance of this pest…about an inch or so in length, black or brown with orange markings, and long skinny legs. If you see one, don’t pick it up. If you can, try to trap it and call the health department. Not all kissing bugs carry the parasite that causes Chagas, but you won’t know by its appearance.

The first link below gives more tips for how to minimize risk; the other links also provide useful information.

Help Save the Rusty Patched Bumble Bee (bombus affinis)!
Status Endangered!
Its numbers have dropped 87% in the last two decades. 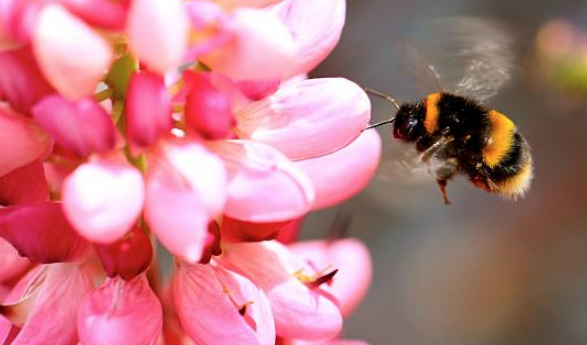 Rommy Lopat, a Member of the Civic Beautification Committee of Lake Forest, wrote the following about helping the Rusty Patched Bumble Bee:

Pleases consider challenging your club to count how many of these plants they have in their yards for feeding the Rusty Patched Bumble Bee. Also, challenge members to take photos of Bumble Bees on their plants and we will figure out how many types of Bumbles we have and if any (probably not, but…) are the Rusty Patched variety.

Here’s the plant list: I have 18 of the 36 plants in my LF garden:  https://www.fws.gov/ midwest/endangered/insects/ rpbb/plants.html  [This plant list works for Monarch Butterflies as well because it includes Milkweeds.]

Background Info from the US Fish & Wildlife Service

Just 20 years ago, the rusty patched bumble bee was a common sight, so ordinary that it went almost unnoticed as it moved from flower to flower, collecting nectar and pollen. But it’s now balancing precariously on the brink of extinction and has become the first-ever bumble bee in the United States to be listed as endangered. It was once found across 28 states from Connecticut to South Dakota and north into two provinces in Canada. Today, we find it only in a few locations in Illinois, Indiana, Iowa, Maine, Maryland, Massachusetts, Minnesota, North Carolina, Ohio, Pennsylvania, Tennessee, Virginia, Wisconsin – and Ontario, Canada. Abundance and distribution of rusty patched bumble bee populations have declined by an estimated 91 percent since the mid to late 1990s.

Threats to the rusty patched bumble bee include disease (for example, from infected commercial honeybee colonies), exposure to pesticides, habitat loss, the effects of climate change, the effects of extremely small populations, and a combination of these factors.

Bumble bees such as the rusty patched are important pollinators of plants and wildflowers that provide food and habitat for other wildlife. They are also the chief pollinator of many economically important crops. Bumble bees are able to fly in cooler temperatures and lower light levels than many other bees, such as honey bees, making them excellent pollinators for crops like tomatoes, peppers and cranberries. Even where crops can be self-pollinated, the plant produces more and bigger fruits when pollinated by bumble bees.

DEER-LY BELOVED ARE TICKING OFF OTHERS
by Marge McClintock 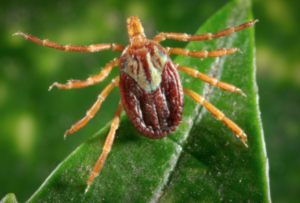 Experts tell us that ticks have been increasing across the country and in our area as well. Some ticks, such as the Lone Star Tick, carry a virus that some scientists say is even worse than Lyme Disease as it can be transmitted in a very short time and can cause a severe and deadly allergy to red meat. This tick as well as the more common deer tick are not only a nuisance, but a significant health threat.
What are some ways you can protect yourself? While most people love to see a handsome buck with his full rack of antlers or a sweet dappled fawn, medical personnel and wild life experts are adamantly against anyone feeding wild deer — not only for the sake of the deer, but also for the sake of homeowners and their pets.  When deer are fed by people, they don’t develop their own foraging skills, and are more likely to die during the winter. But how about people?  Although mice, voles, and other animals can carry ticks,

because of their size and behavior, deer are the primary host for the deer ticks that carry Lyme Disease, as well as several other dangerous diseases. Scary pathogens that are found on deer ticks are Lyme disease, babesiosis, human granulocytic ehrlichiosis, Rocky Mountain spotted fever, human monocytic ehrlichiosis, Q fever, Powassan encephalitis, and Southern tick-associated rash illness — AND you can catch more than one of these diseases from the same tick bite. One single deer can carry 500 – 1000 ticks and several million of the minuscule eggs and larvae.  So, here are some suggestions to protect you, your friends and relatives as well as your pets:

Here are links to other articles should you wish to read more about this growing threat: 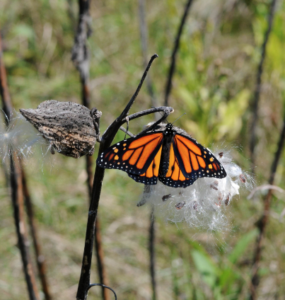 “It has been brought to my attention that some “Big Stores” have been selling Milkweed plants that have been treated with systemic Neonicotinoids. This will kill caterpillars! Please, be aware and be on the lookout for these tags placed in plants. Please pass this information along to members!”

While we all go a little batty at times, especially in the fall when we rush to finish end-of-the-season gardening tasks and social obligations intensify, did you know that bats are far more active in autumn as well? With this increase in bat activity, you are more likely to encounter bats in or around your home. Lake County tests bats annually and have found roughly 4% are rabid. So, while it is recognized that bats can do much good for the environment with some species being pollinators and many bat species consuming pesky insects, we do not want any personal, close contact. The following links will give you information on what you can do to protect yourself and family and who you can call should a bat get inside your home or garage.

U of Il Extension Service:
http://web.extension.illinois.edu/wildlife/directory_show.cfm?species=bat 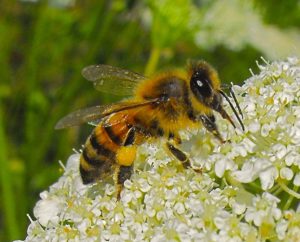 We are warned daily about protecting ourselves against the Zika and West Nile viruses, both carried by mosquitoes.  Wear protective clothing, use bug repellant, treat standing water, spray for mosquitoes.

Less often we hear about another disease affecting bees called Colony Collapse Disorder, which resulted in the loss of 44% of honeybee colonies last year in the US.  Bees are vital to our agricultural economy: their pollination contributed over $14 billion to the value of our crops in 2015, are necessary for many crops such as blueberries, cherries, and almonds — and of course, the more than 175 million pounds of honey harvested annually in the US.

But thiamethoxam and clothianidin — two insecticides banned in some European countries but sold in the US — have been found to reduce sperm in male bees.  Look for insecticides that don’t include these chemicals.  Don’t spray insecticides on flowers when they are in bloom.  And if there is a breeze — protect birds, bees, and yourself by not spraying insecticides until it is calm.  Bee safe!

What should we use to protect ourselves from these annoying and dangerous insects? If you are concerned about DEET, which is considered to offer the most protection, the U.S. Environmental Protection Agency says we can rest easy. It is safe! For more information, including using DEET on children, click here: https://www.epa.gov/insect-repellents/deet

What about all of those products or methods that claim to offer protection in “natural” or safe ways? Many don’t work. This article lists seven products or  methods that are not very effective. Check it out: http://www.health.com/home/ineffective-zika-products?xid=healthyliving08102016 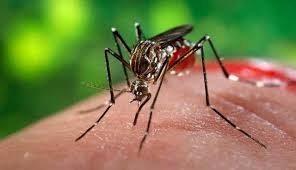